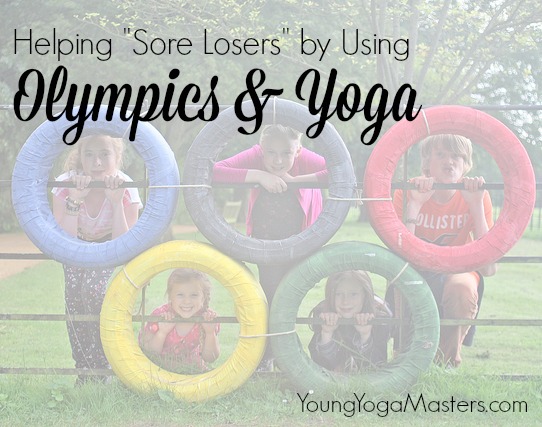 At the end of a kids’ yoga class I announced, “Now it’s time for a game.”

To which one child responded, “Is it a game where people get out?  I don’t want to play if I get out.”

Today’s blog post is about olympic spirit and the joy of playing. It includes important yoga philosophy that can help children, especially kids who have trouble with losing, understand why it really isn’t whether you win or lose, its how you play the game.

Competition for Kids: Good or Bad?

When competition is seen as a rivalry, it’s easy to understand why kids don’t like to play. They risk the chance of becoming “losers” rather than participants.  The root of the word competition means “to strive together.”  In this sense of the word, competition can be a wonderful experience of completely involving yourself in a task, bonding with a team, improving a skill, and striving towards a goal.

Take the example of the school children in this picture. They broke the world record for the largest Olympic rings.

To give kids a fresh look at competition, consider a lesson plan with this insight from my yoga teacher, Yogi Bhajan.  He said we all have three minds:  the Negative Mind, the Positive Mind, and the Neutral Mind.

The negative mind is not negative meaning bad.  It is awareness of the negative, the dangers and obstacles that will result from a choice.  Simply put, the negative mind may think “if I play a game then I might lose”, which might make someone less inclined to play at all. The negative mind thinks that losing makes a person a loser. It pays attention to all the things that could go wrong in any given situation.

Ask the kids for examples of the negative mind in their life or with family or friends.

The positive mind is not necessarily the good mind because of the word “positive.”  It’s thinking that helps us see opportunities and pleasant outcomes.  The positive mind may think, “I’ll play and I’ll win, and that will make me a winner”. It is the mind that realizes that there is value in trying your best, no matter the outcome.

Ask the kids for examples of the positive mind.

The neutral mind weighs both the positive and the negative, and then decides.  It quickly recognizes that everything can potentially have dangers and opportunities that can be evaluated before a decision is made.  The neutral mind also sees how both negative and positive events help you grow.

The neutral mind thinks, “I may lose or I may win, but that will not determine who I am. I will play for the fun of doing my best, being part of a team, and becoming a stronger player.”

Ask the kids when they have noticed their neutral mind in action.

Yoga Poses for the Neutral Mind

To strengthen the neutral mind, try yoga poses that raise your energy from the base of the spine upwards.  Examples include:

Then move to yoga poses that open the heart:

Leave a  silent period at the end to let the children rest in a neutral space during relaxation.

The Olympics are wonderful example of striving together.  Try watching the Olympics together to observe athletes handling both victory and defeat.  These athletes can be valuable role models to help children discover the joy of striving, regardless of whether you win or you lose.

With a neutral mind, what matters is playing the game.

Share your thoughts and ideas in the comments below!