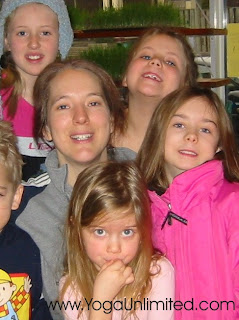 Can You Spot the Dangers?

No, its not loving them too much.

Nor is it trying to protect them from getting hurt, thereby never letting them grow.

Sure these are important, but there’s one thing I’ve found to be even more dangerous than these. The problem is we forget about it until it happens – and then we think, “How did I forget about this!”

Adults Beware!
The truth is this Danger isn’t even to the kids – this danger is to the adults! Especially since adults take a little longer to heal than kids do. And remember what they always tell you on an airplane: In the event of an emergency, put your own mask on before you put the mask on the kids.

That’s important with this danger because it’s very hard to teach a yoga class lying flat on your back watching stars circling around above you. And it’s equally difficult to show kids the benefit of holding a posture when you’re holding over-the-sink-to-stop-the-nosebleed pose as a result of this danger.

I didn’t tell you about the biggest danger of kids yoga, because I actually forgot about it until it hit me again – literally. Probably for the third or fourth time in ten years. So now it is my duty to try to warn you – even though no amount of warning may stop it, no amount of caution may help you see it coming, and no amount of describing the pain will deter this BIG danger.

So I might as well just tell you and hope and pray somehow it will help.

The first time happened when I started working with kids. Often it’s the little ones that get you at the beginning, but none of the kids are immune from doing it.

Picture a cute little girl, a young teacher, a high up object that she wants. Why if she just jumps into my arms, I can lift her up and she can get it herself. So with hand signals and a happy tone I suggest “Why don’t you ju…” OOOF, I’m hit. Her head to my chin. Gives new meaning to the phrase tongue in cheek.

Second time: School-ager doing a beautiful downward dog. Takes a little rest. Good job! Go to pat him on the back. Boom! Head to forhead. Manage to hold it together as the room gets a little black.

Then there was this latest time, of course it has been years since the last one, so I really thought those days were long gone.

But when you least expect it – watch out!

This time it’s the last class of the year. All these kids have done this yoga at least 20 or 30 times. No problem. Everyone is happy and excited. And of course there’s a new parent observing things in the daycare. Should they enrol their child or not? Hmmmm.

Just like we’ve done hundreds of times with the pre-schoolers – Downward Dog tunnels that the kids crawl through. Now, I’ve had a few close calls doing this one, but it’s so much fun it’s worth the extra pre-cautions. So all the adults go into downward dog, looking around and greeting each child as they pass through. But this time a three year old mounts a surprise assault coming through the tunnel from between my legs rather than the side where I am looking.

Hey what’s that – Smack! Head to nose. Now, I actually went to get a tissue because I thought I was bleeding, but luckily I was spared the blood. I did, however, end up with a red crease line across my nose that lasted for three days.

A three day visual reminder of one of the biggest dangers of kids yoga: The Head Butt.

May you use this reminder so you don’t forget like I did!