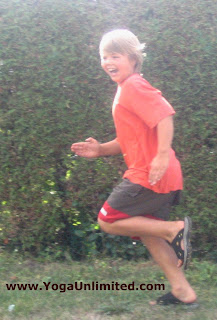 Letting Tweens Teach Yoga Class to the Other Children

Class two of summer daycare with the tweens turned out to be more challenging. It brought up a lot of talk with the kids about emotions and about winning and losing.

In this past blog  post I told you how the kids in my tween class are going to teach the class this summer.  This week, one of the tween-teachers was away, leaving one girl to teach on her own. Did she still want to do it? You bet!

We met for the class outside on the grass under a tree. It was warm and sunny. The student/teacher started off with “tuning In.” Ong Namo Guru Dev Namo (Kundalini yoga style) which she translated as “Let’s say hello to the wise teacher inside you.”

Soccer Style Warm-Ups for Yoga for Kids – Why Not?

Because this teacher plays a lot of soccer, the warm-ups were different than what we usually do. We did sitting forward bends and butterfly legs. She led the kids in some challenging leg lifts and everyone kept up with her! (personal note: I almost asked her to switch to the warm-ups I usually teach, but waited to see what her warm-ups were like. They were good stretches and challenging and I felt it was better to let her choose the style, after all she was teaching)

Then she introduced a game invented to turn tag into a yoga game, a game not too different from regular tag.  Usually when the person “IT” tags/touches someone, they are out. In Octopus Tag, there are two ends (we used two fences). The kids are all at one end and run to the other end.  The person who is “it” tags people as they go back and forth. When someone is tagged they hold a yoga pose until the last person is tagged. The last person to be tagged is “it” next.

This game led to a few problems to work out for the eleven year old girl teaching the class. Each time the kids came to me with a complaint or problem I called the student teacher to help solve it.  We all came together, the kids, the student-teacher, and me, and we figured out a solution with the “teacher” making the final decision.

Here are some problems that arose:

The first time we played the game it lasted about 15 minutes with only one person “it.”  The kids who got out at the beginning were getting bored and couldn’t hold the yoga pose for that long.  When they complained, I called the teacher and we all had a quick discussion.

She decided that we would increase the number of people “it” to three. Kids could sub out if you did a yoga pose.

At this age feelings can be hurt very easily. One girl protested getting tagged out and refused to leave the game. Then another girl got tagged out by her best friend and felt it was a grave betrayal.  Their friendship was over – at least for the rest of the class.
For tweens, emotions can run high and the idea of what is fair and not fair is very important.  We had to take some time during the game to talk to the kids as they dealt with these issues.

At the beginning of our next class we will have another discussion about emotions and what happened. It is a great chance to discuss emotions, what they are (from a yoga perspective), and tools to deal with them.

The Question of Competition

My teacher, Tulshi Sen, says that every question is a quest.  Our quests are what make like worth living. I know that many people do not like to play games where people get “out.”  Personally I don’t teach “out” games in class, mostly because they bring up a lot of issues that are hard to deal with in a short time, like all the problems I mentioned above.   Plus you don’t want the kids who are out just sitting around watching.

Some kids like to play games where they “get out.”  One of the biggest challenges we face in life is overcoming our fears, including fear of getting out/losing/failure.  It is tempting, like Arjuna in the first chapter of the Bhagavad Gita, to not want to fight at all. The whole Bhagavad Gita is a story from the battlefield, with Krishna (Arjuna’s Consciousness) encouraging him to fight the battle ahead of him and teaching lessons about facing fear.

Stories have been told through the ages to build heroes. These games in the playground may be useful when we later face the battles of life.

The girl who was the teacher is a natural leader. But she was faced with the challenge of the game she chose, she had to handle the conflict and make decisions. It was hard and she rose to the task of it.

After the game was over she led the kids in a relaxation and asked them to lie down and imagine they were in their magic garden and all their worries and problems were gone.

She helped them release their problems and by handling all the issues that came up, she built her own confidence.  Although the class was challenging, it is by facing challenges that we grow, not by avoiding them.  She took the tangled mess of Octopus Tag and turned it into an opportunity to practice her leadership skills.

I’m always glad when yoga teaches kids more than just how to stretch!