Tween Games for Yoga and Fun 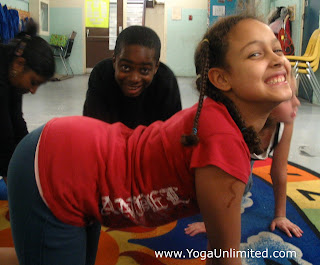 The girls added a twist to it that if you didn’t get into your yoga pose within 3 seconds you sat out on the mat. You had to wait till someone did your yoga pose before you could come back in.

Some other rules to Yoga Freeze Dance:

The teachers followed the structure of the class and for the yoga part we played Yoga Freeze Dance. This class was a huge hit and we ended up going five minutes overtime.

The greatest thing about it was there was no yelling, complaining or talking back! It was such a joy to see all the kids dancing freely then freezing in a yoga pose. And a greater joy to see the happiness of the two “teachers” as they led the class and knew exactly what to do.

This summer in my daycare class of tweens, we came up with a plan for yoga that all the kids are excited about. We agreed that the kids would teach the yoga class all summer long.
It started when the kids requested to play tag one day. I thought of how much they like games, and how easy it is to play them. But tag isn’t yoga. … or could it be?
Next class I suggested that because they had a lot of good ideas and they’ve been doing yoga all year, they could start teaching. Who wanted to try teaching a class?
Almost every hand went up.
We made a schedule and posted it in their classroom.
We reviewed the components of a class:

The two classes so far have been among the most relaxing, fun, and challenging classes ever.

Two girls taught the first class and they were fantastic. They are best friends in the class and are usually together so why not let them teach the class together. The kids in the class also respect them so they had everyone’s attention from the beginning.

Let them Handle the Challenges
They also faced a challenge right off the top: Rain. We couldn’t go outside to do the game they had planned, which needed a lot of room to run around in. So I gave them the choice of postponing their teaching or changing their game to something we could do inside.

They Wanted to Teach
The girls didn’t wanted to miss out on their teaching day so we quickly brainstormed some new games and they chose: Yoga Freeze Dance.