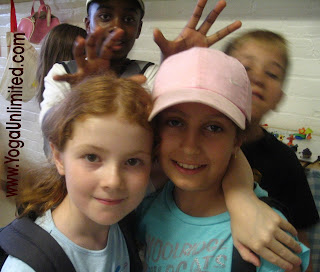 Teaching Yoga in Daycares is a great way for kids to discover yoga. You can have short (30 minute) classes with all the different age groups in the school. Personally, at first I found the most challenging of these to be the tweens.

Yoga with tweens (aged around 10 – 12 years old, between kids and teens)requires a certain knack, especially when they are in daycare. Unlike most kids in studio yoga classes, the kids have not chosen to be in the daycare. Many of the daycare kids are a few months away from being home on their own, close to independence.

In a studio class this age group is usually no problem. But in a daycare setting, somehow the hormones, group setting, and classroom dynamics can morph into a real pain in the asana. So how do you get them onboard?

All this can happen with eyes rolling, whispers under the breath, and glances to each other or to the teacher to see how much they can get away with.

Get the idea?
Basically they want to do the exact opposite of daycare, which is all about following a routine, structure, and group activities.

In daycares, tweens require a special finesse. They may have had a year of yoga but not want to do it that day.

I’ve found that once they start the yoga that day, they like it. I’ve seen the most belligerent groups start laughing and smiling once they get into it. Yoga is a natural mood improver that works for all ages.

But before I get into effective ways to teach tweens, here are few samples from actual daycare tween classes, just to give you a taste of what may be “normal” culture.

One is a story from a daycare teacher, the other I witnessed as I was setting up for yoga class.

Daycare Teacher (to the class): Who wants to have yoga this summer?

Ex 2: Can We Play Tag?
Daycare Teacher as I set up for class: Now it’s yoga time, we’re going to start yoga so everyone come and sit down.

Tween: Can we play tag?

Daycare Teacher: No we cannot play tag, didn’t you hear what I just said, come and sit down.

You Can Do It!
Don’t get intimidated from working with this age group. Once you understand how to do it, they get into the yoga (or any activity) and put themselves totally into it. The trick is learning how you can get them interested.

In fact, I just started the summer program with a tween class and used a strategy that had everyone so into the yoga we went 5 minutes over time.