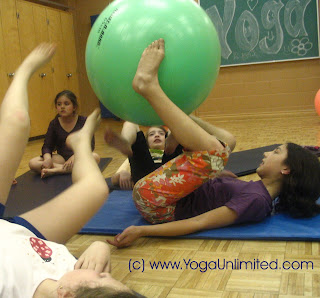 I’ve been talking about the importance of networking for finding new kids classes. I know there are some of you who are already teaching classes or doing yoga with your kids at home. You may want to try this simple yoga game to help kids learn about networking and collaboration.

One of my kids classes at the Bob Abate Community Centre took place in the same room as the Pilates class. It had about 8 big yoga balls lined up on top of the cupboards. Believe me – they are often the first thing the kids saw when they walked into the room.

Why wouldn’t they be excited about massive bouncy balls?
While balls can be fun they need to be handled with caution as it is really easy for kids to fall off them. When I use the balls I introduce them slowly, usually in my game time at the end of our class.

A Networking Game for Learning to Work Together
Kids these days may know Networking more as hooking up your computers together. This game will teach them how to work together as people.

I also like this networking game because the kids can’t fall off the ball, the ball falls off the kids. Much safer when you’re first getting to know the kids and how careful they can be.

What is Networking Anyway?

Networking may seem simple, after you are just talking to people. Right?

A computer network is a group of computers synched to comunicate smoothly with each other. But networking is more than this, when it comes to people, networking is really an Art!

It is talking to people to connect in a positive way and build alliances. Find out what you have in common, what beliefs you share, and also what you do differently. You also discern what the people will really offer as you build alliances.

For instance if I talk to another yoga teacher who teaches pregnant women I can have a nice conversation. That’s great.

Networking is when I start to discover who this person is. Does she teach alot of asanas, does she teach meditation? Which of my students would like her style of class? Would I refer others to her? Do I like her personality? Do I feel good about her skills?

I may refer one of my pregnant students to her. It helps my student becasue I don’t specialize in pre-natal yoga so I can’t serve my student as well. My student is happy to get the info she wants. The pre-natal teacher is happy to have a new student.

Networking is also finding out what my student thought of the pre-natal classes.

Your Network Reflects Who You Are
Networking is building alliances that will also reflect on your businesses. We become like the people we associate with so make sure your network reflects you and who you want to be!

Another cool thing happens as you build alliances. When that pre-natal yoga teacher tells her moms-to-be about my kids yoga classes – it helps my business grow too!

Networking is the Art of Building Alliances
It may seem simple but it is actually a skill that is learned. If kids can learn how to co-operate and work with other kids it will help them in many ways.

Many of the games I play in kids classes are group games that help kids build their social skills. Yoga is often a solitary pursuit so the group games contribute to the skills of building alliances.

This is a simple game that can be played with 2 player or more. As you can see in the picture above, you hold the ball between your feet and pass it around. It is a simple concept but still challenging and fun.

The kids work together to make the transfers and try not to drop the ball. If they drop it, they pick it up and try it again.

See what happens to your network of kids when they have to pass a yoga ball.

Throw in a Surprise!
You can try passing a big yoga ball, a beach ball, even a tennis ball. Watch their mouths drop if you pull out a golf ball! They will be so excited. And each challenge requires alliances with your neighbour and cooperation to pass the ball on.

This game can be played for around 15 minutes (longer with a large group) if you pass different balls. I wait to see how much time there is before I tell them which balls I have. If you don’t have too much time, you can play with a different ball each week and surprise the kids as they get smaller and smaller.

Even 2 people can pass the ball then touch the ball over your head, then pass it back again.

Have fun with building networks in your yoga classes. And don’t drop the ball in your business networking either!