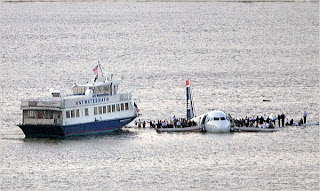 I can barely handle the news – so why talk about the news with kids?

But last Friday everyone was talking about the miracle landing of the Plane in the Hudson River. At the daycare the teacher had the newspaper pictures spread across the table talking to a parent. We were all amazed by the story. Maybe because it was so nice to see a story with a happy ending! All the adults were talking about it.
Little Jugs Have Big Ears
One of my friends (a daycare teacher and supervisor) used to always say with a nod towards the little ones, “Little jugs have big ears.” This signaled our conversations was getting too adult. I wondered what those little ears had heard about the plane. Did they want to talk about it too or would it remain a vague reference they would never really understand?In light of this, instead of going ahead with my planned yoga class, the pre-schoolers relayed what they had overheard that morning. A super-simplified story about a plane crashing on the water and boats coming to pick the people up. Everyone was talking about it because it was the story of a real hero and a brave warrior!The Courage of a Warrior – Staying Calm when Faced with Fear
We talked about how scared that pilot must have been when he had to land the plane but he kept his cool and saved everyone. I asked the kids, “What did he do?” Did he start crying? (No!) Did he call out for his Mommy? (laughter – No!) Did he breath like this (panicked breathing)? (No!) How did he breathe? Yoga Breathing!
The pilot remembered what a warrior is – one who overcomes his fears and faces his battles. His battle was to land that plane. His battle was to stay calm. His battle lay before him and he fought his battle. He stayed calm and landed the plane and no one was hurt. He did it. Has anyone ever faced a battle? Has anyone ever been scared about something but did it anyway?The Battles Kids Face
One girl recognized the battle she faced when she had to sing at the Holiday Concert. Another didn’t like to be alone at bedtime.We included hero, warrior, airplane, and boat pose in yoga that day. But, mostly I was glad we got to discuss what the kids had overheard from the news that day. I’m not sure where the saying about little jugs having big ears comes from. Those jugs must fill up with a lot of muddy information that needs explaining. When kids aren’t sure about what they hear, they don’t feel confident. When it is brought into the open, it helps them build confidence.

I’m glad when yoga class is a place to clarify things and bring them into the light.